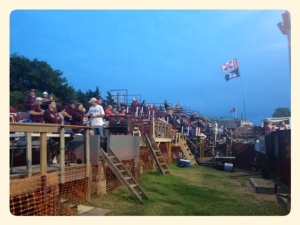 I was asked if I had been to a game at Mississippi State by Todd Maddux of Southern Miss when I visited “The Roost” a few weeks ago. I told him I hadn’t and he suggested if I got the chance to go and check it out, this is all he told me. I didn’t think much of the comment.

I arrived on the campus of Mississippi State around noon yesterday, it was raining. I worried  it wouldn’t let up and the game would be cancelled. I knew nothing of Mississippi State baseball. I didn’t realize they played UCLA in the national championship series last year. I sat in the campus bookstore for about five hours writing and organizing. Around 5:30, I decide to find the field.  I drove all over the campus, I was impressed at its Southern formality. I pulled in and parked my car near the RV’s and campers. I smiled knowing I have a place to sleep, and Mississippi State is like the rest of the SEC and ACC schools I have been too, hard core!  I talked to one gentleman with a RV, he told me this night is a “little light” for fans but make sure to see the folks in the “Left Field Lounge”,  they will feed you.  Again, I thought nothing of the comment. As I walked to the stadium ticket window, I smelled the barbecue and I was hungry. As I walked in I purchase a barbecue pork sandwich, it was terrible. I wondered how something which smelled so good could taste so bad, I threw the half eaten sandwich in the trash.  I asked an usher where the General Admission seating was, she said, “Right around the corner to the left”.  I went around the corner and then to the left, quickly checked my Facebook page, looked up to find a seat and then had a “what in the hell” moment.

“The Left Field Lounge started out in the 1960s with just fans driving cars and trucks into the area to watch a game. In the late 1960s, fans started bringing grills, tables, and ice chests full of drinks for a full tailgate experience. At that time, fans would drive in before the game to set up their tailgates, and then take it all down after the game and drive back out. As the area became more popular, a line would form to get in before the game, the area would fill up, and some would be turned away. In the early 1970s one truck driven to the Left Field Lounge would not start and was unable to leave after the game was over, so the owners just left the truck there. For the next game, the truck was still there, creating an automatic reserved spot. Other fans took advantage of this and brought in trucks and grills intending to leave them there. Some trucks which were no longer drivable were towed into a spot. To allow more fans to share a space, home-built seats and bleachers were built onto the beds of the trucks. Later, motor homes and flat bed trailers were brought in with more elaborate and sturdy bleachers. Eventually the university established rules for the cherished spots in Left Field Lounge. Spaces are rented for the season, and after all of the spaces are filled, those not receiving a space are placed on a waiting list. The trucks/trailers/motor homes must be on wheels, brought in by a certain day before the season starts, and removed after the season ends.” (Information from Wikipedia.com)

As I walked into the Left Field lounge I was in awe of the spectacle. People were barbecuing, drinking, laughing and just enjoying the moment.  I saw some guys up on one of the hand made platforms which was built over the top of an old truck.  This platform had old bus seats, a stereo system with music blaring and a grill off the back end where they were fixing grilled brats and sausages.  I yelled up to them and asked  what was happening back here. Hays Stephens, who was grilling, yelled back, “First time in the Left Field Lounge?”  I said it was, he invited me up. I told him what I was doing, he started feeding me. He didn’t ask if I wanted anything, just said you have try this and handed me a beer, “From Wisconsin” he said with a smile.   Other guys came and talked to me, I was overwhelmed by the hospitality and the spectacle.  Hays grilled food the entire game, sausages, pork tenderloin, tamales, brats. It all smelled great and the ‘tasting’ was wonderful!

I was told numerous times I came on a bad weekend, since the students just got done with school, it was raining, etc.  I was still impressed with the turn out, 1/3 of the stands and about half “The Left Field Lounge”. Eric Entrekin a 2001 MSU grad said, “I would rather be out here than the sky boxes” as he pointed to the luxury boxes. He brings his son to all the games, saying “it is a three day tailgate!”   John Mattison stopped by with his Zing Zang Bloody Mary mix that is distributed all over the country to welcome me. He gave me some of the history of the “TLFL”.  John has been coming out to the games for over 25 years.  I went down and took a look at Justin Tates “Redneck Sky Box”, had a great discussion with him about all the opposing teams fans who come out and party with them. He also let me know  some of the opposing team’s players have been known to sneak back to eat after the games.  Hays told me everyone is welcome to come back and join in the festivities and they  welcomed me with open arms!

Mississippi State has all of the top 11 on-campus crowds in the history of college baseball. Overall, the stadium has held 15 crowds over 12,000 and 31 crowds over 10,000.  Two weeks ago they set the NCAA mark with 15,586 fans at the Saturday game against Ole Miss their arch enemy. Shane Sanford told me it was probably too crowded since it was very hard to get around.  Unfortunately, as far as the baseball game was concerned, the Bulldogs were beaten, 4-2, by Tennessee, it wasn’t for the lack of fans on the platform trying to will them to victory, with all the cow bells and rally caps. It was just not meant to be even when MSU loaded the bases with no outs in the 8th inning, the next three batters struck out. I heard a few “Welcome to State baseball”. And a, “Why did I choose to come to this school”, obviously said in frustration.

This is another one of those stories I am not doing justice to. No wonder Todd Maddox mentioned to me to stop by if I had the chance. “The Left Field Lounge” has been voted the best tailgating experience in all of sports. I have to say,  I have found no comparison and wholeheartedly agree with the statement! It goes to the top of my list of places I want to get back to again! I slept in my car in the stadium parking lot with the RV’s and campers, Shane Sanford and Eric Entrekin  graciously offered other alternatives.  I want to thank everyone I met last night, it was an awesome experience. One you have to witness to believe, MSU has an experience like no others! Also, I am trying to do some things with video so forgive me for my inexperience! Even though, I wanted to share so check it out ~ The “Left Field Lounge” video.