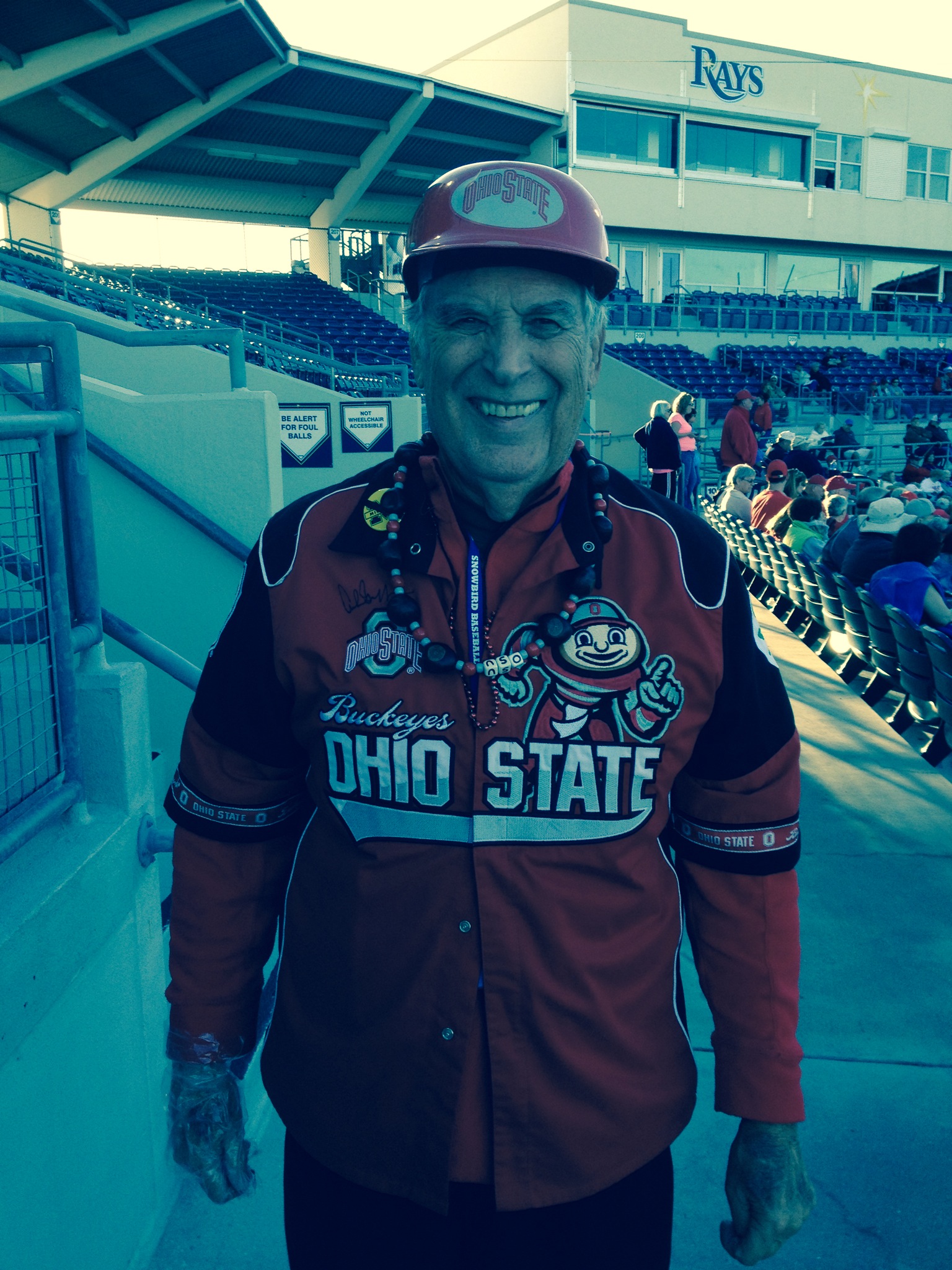 I met Jim Laurent on the 3rd base side of the Charlotte Sports Complex, he immediately told me that it was Woody Hayes 101st birthday, I immediately thought Woody Hayes is still alive?  I, of course,  didn’t ask Jim if Woody was still alive since I wanted to come across as being knowledgeable to Ohio State sports history besides I would have thought Woody would have died of a heart attack since he was such an intense coach.  Another reason I probably didn’t question Jim was because he was talking to me in this goofy dog outfit that he had borrowed from the Country Hound Café in Englewood, Florida.  Jim and the large group of Ohio State fans were at the game to cheer on their beloved Buckeyes, I was impressed with the turnout for the first baseball game of the season at the Snowbird Baseball Classic put on and organized by Steve Partington and his wife Shannon, who I hope to talk with at a later time and who are also Ohio State fans.

To the people reading and don’t know who Woody Hayes is he coached the Ohio State football program for 28 seasons and won 5 national championships, but despite these great achievements he was fired after the 1978 Gator Bowl for punching an opposing player during the game!  To read more about Woody just click here http://en.wikipedia.org/wiki/Woody_Hayes.  I had to actually look up to see if Woody had died, he did on March 12, 1987.

Jim is the ideal type of “character” that I thought would be a fun to profile, he is 78 years old has been retired from the Air Force for the last 24 years.  Jim grew up in Mt Vernon, Ohio where his dad would drag him to all the Ohio State sporting events so he says it just automatically gets in your blood.  He has been a friend of the Ohio State Alumni Association for years, he quickly points out he never attended Ohio State, he enlisted in the Air Force instead, where he worked during the Cold War in Germany, on a “Top Secret” project involving electromagnetic monitoring, he really didn’t have any idea what it was that he was doing since it was a “secret” until 20 years later; they were monitoring the Soviet Union, Jim likes to joke, “In God we trust; all others we monitor”.  He met his wife Gisela while stationed in Germany and they have been married for the past 53 years.

Jim eventually took off the goofy dog outfit and put on his Ohio State hard hat, necklace of Buckeyes, and Ohio State pit crew jacket which is autographed by 2 time Heisman Trophy winner Archie Griffin.  Archie saw that Jim was wearing this very stylish pit crew jacket, like the ones worn in NASCAR, at a sporting event and wanted one but Jim told him that only 80 were made and he had the last one which he got at a discount because it was too small for him at the time, he had to lose about 12 pounds before it fit comfortably.  Archie autographed it instead and Jim displays the jacket and autograph proudly. More information on Archie Griffin, click here http://en.wikipedia.org/wiki/Archie_Griffin.

As Jim and I were speaking he  would shout from time to time, “O.H.” and the rest of the Ohio State fans would yell, “I.O” this obviously spells Ohio, it took me a few times to understand what they were yelling and I could tell that the players seemed to enjoy hearing this battle cry.  At one point an Ohio State player hit a grand slam and Jim jumped up and had this toilet bowl brush that was in Ohio State colors and decked out in Buckeyes he started pointing this toilet bowl brush and shouting “Grand Slam”  and the rest of the crowd started yelling it with him.  I was laughing pretty hard at this and I have to say that I felt like I hit a gold mine with Jim as far as putting the fanatic in the “fan”.  He explained to me that he uses his toilet bowl brush in football for first downs, basketball for 3 pointers, and in baseball for base hits.  It goes something like this for a football first down, “that is another Ohio State first down” and he points the brush in the direction of the first down.  I scan to see what his wife Gisela is doing as I am talking with Jim and when he riles up the crowd, she seems like the perfect wife and to me she enjoys her husbands antics.

Jim is a huge soccer fan and is his favorite sport he has been to 4 World Cups, he said that he is friends with a couple of the “kids” on the team, I highlight “kids” because Jim said it and what I like about Jim is that he has a lot of “kid” in him even though he is 78, I truly believe that age is relative to how you feel and your outlook on life.  As President of the Rotonda West Association Buckeye Club or RWA, which has over 200 members, Jim gets people involved with Ohio State sports when a team is in South Florida, he says you can be a member or friend of the club if you have ever driven through Ohio, so I actually qualify, but will refrain since I am a Wisconsin Badger through and through.  RWA organized lunch for the Buckeye baseball team in between games the day after I met Jim, he and his friends also made sure that I ate which was very much appreciated since I am on a limited budget, he even got some of the baseball players to pose with him in the OHIO pose, similar to the YMCA pose, I posted pictures.

Ohio State beat UConn in their first game of the season, the Ohio State fans were very gracious to me.  Jim please don’t ever fully grow up, you make sporting events fun!  I will check to see if you have a Buckeye in your pocket next time I see you since you said that you always have one with you, unless you are naked.  I have to admit that I really didn’t know what a “Buckeye”  was for years and just recently looked it up, it is a tree, I always thought it was the nickname for a Wolverine…  Just kidding Ohio State fans, it was a pleasure meeting all of you.

If you enjoy this story and you want to help me complete the “Baseball in America Tour 2014” which is roughly 265 days, please click on the following link to see how you can help http://www.baseballbuddha.com/sponsor.html.  Please also share this on your Facebook page and Twitter, I appreciate all the help I can get!

"Love the game of baseball and baseball will love you."